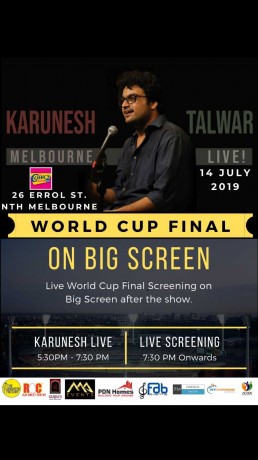 Karunesh Talwar, having started out in 2011 first started uploading stand up on YouTube in 2016, where his seven videos have gained a combined 26 million+ views, and also given him almost 400,000 subscribers. In 2018, he was invited to the Melbourne International Comedy Festival in Australia where he did more than 20 consecutive shows and also featured on Australian television, on ABC TV’s show Comedy Up Late. Later that year, he was invited to the prestigious, world famous Soho Theatre in London where he did a week-long run with fellow Indian comic Sumit Anand, which played to largely full houses and was well reviewed. His videos on YouTube are from his first stand up special, Paka Mat Na Mote. His second special, Pata Nahi Par Bolna Hai will be released on an Internet streaming platform (which no one’s allowed to name but everybody knows) soon!!

A time of great laughter and entertainment will be awaiting you!!